Okay, so it's probably worth beginning by addressing something you might consider significant, here: I don't have a PlayStation 5 or Xbox Series X. Not many people do, yet - either due to stock shortages, budget factors, or simply because of waiting until there are more games available for the new consoles. I only very rarely jump straight on a new console as soon as it's out, and tend to wait for deals and bundles before joining in. So, I'll get there, likely sometime in 2021.

Nevertheless, even if either next-gen (new-gen... this-gen?) console was under my TV right now, chances are I'd be using it more for work than play - it kind of comes with the territory in this gig. Gameplay capturing for comparisons, playing through side-quests to find the secret stuff, racing through to the end credits of a new release in order to slap a score on the coverage. That kind of fare. Guaranteed, whenever I'm playing a relatively new game, even if it's one I've paid money for and that I want to play, my brain's always turning over content ideas. It's a curse.

This isn't a problem with my favourite new console of 2020, however - and yes, I write this realising the irony of these words existing, at all. The Evercade, by Blaze Entertainment, came out in the spring of 2020 - you can find our review from then, here - and immediately began to scratch at all of my retro-leaning itches.

I'm somewhat longer in the tooth (teeth?) than anyone else on the GB team, y'see, having been enjoying these video game things since the mid-1980s. I started with a Spectrum, then an Amiga, and then SEGA came along and... So on and so forth. So a brand-new console that exists primarily (though, not exclusively) to bring games from the past into the present, in a super-convenient, wholly above-board and fully licensed handheld format? Count me in.

I'm not here to repeat what I wrote in my review of the Evercade, so if you want to know about the console's screen quality, how it plays when plugged into the TV (as that's an option, too), its battery life, or anything else that's more technical, do give that a read. My personal, continued enjoyment of the console, since its launch, has been down to the games more than what they're running on. And yes, you could just play ROMs on some other emulation-ready contraption, if you're not into your gaming being entirely legal. But, allow me a second to talk about both the collector appeal of the Evercade, and the singular joy it gives me.

All of the Evercade's software releases to date have arrived on a uniquely designed cartridge, vaguely reminiscent of the Game Gear's, boxed in a pretty hardy plastic case beside an instruction manual (remember those?), which also provides a little historial insight into the games featured. Each cartridge includes between two and 20 games, and big-name publishers like Atari, Namco, Data East and Interplay already have collections available. 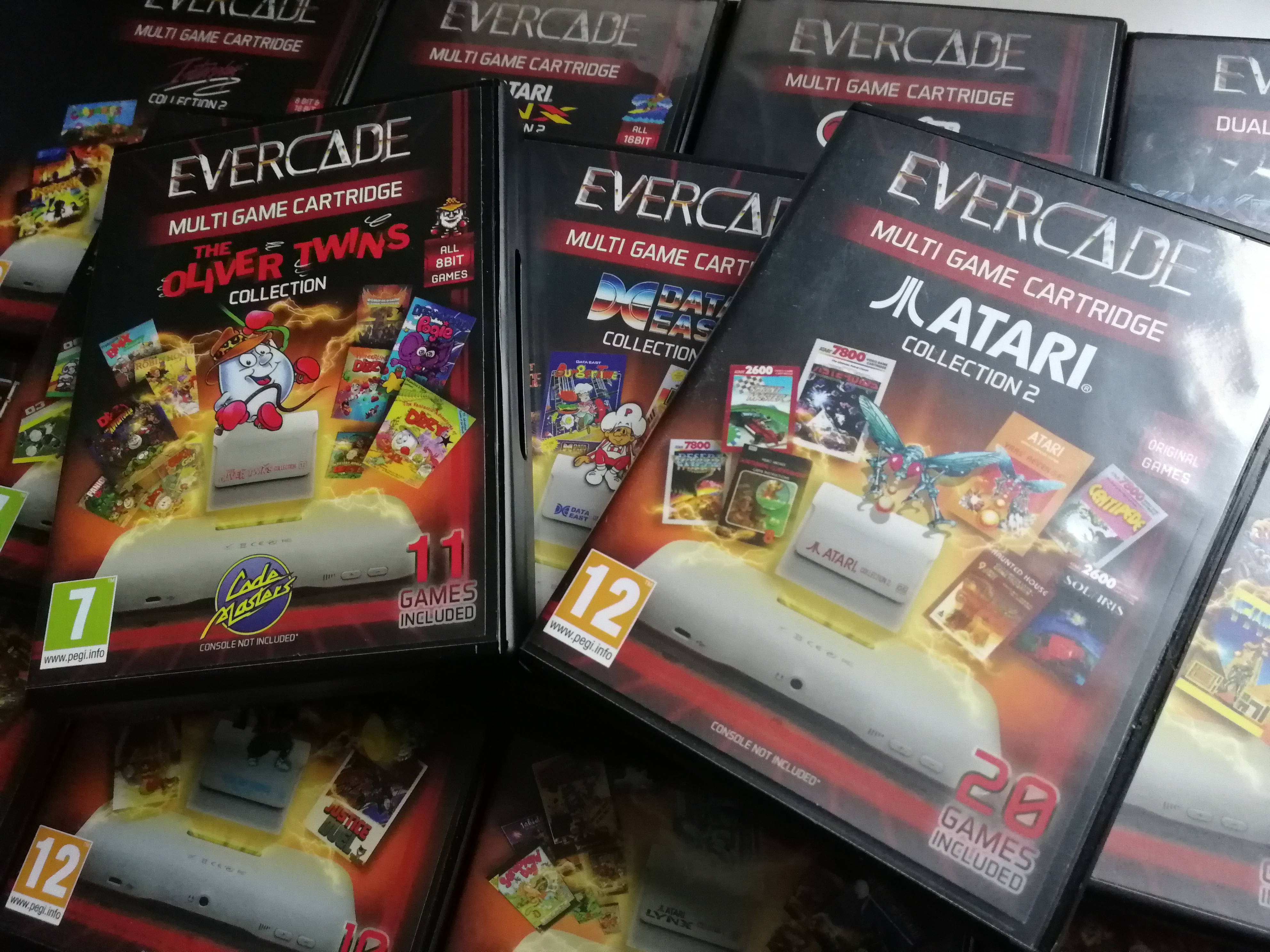 Some of the Evercade's cartridges / Credit: the author

And these carts are all numbered, from 1 to 14 so far (carts 15 to 18 have been announced, and include a Jaleco collection and a trio of Worms games), so there's a definite... urge to get them all. I always enjoyed the stylistic consistency of early Master System and NES games, and the Evercade packaging gives off comparable vibes, with the spines all looking fantastic lined up beside each other. To be missing one of these releases, well, it doesn't bear thinking about, does it?

And these carts are wonderful time machines, transporting the player - me, in this instance - back to titles I played in my childhood, albeit without infuriating disc-swapping or long loading times from cassettes. I've never picked up my Evercade, since its release, with the thought in mind of, uh, I need to squeeze some content from this. It's always been about the fun. And about discovery, too, as so many of the Evercade's collections contain weird and rare offerings, next to long-established franchises and iconic gaming characters.

Take the Interplay Collection 2, for example. Here's Earthworm Jim 2, a game that was everywhere back in the mid-1990s, having released for multiple consoles and computers. But also, here's The Adventures of Rad Gravity, a platformer from 1990 that was published by Activision for the NES, and a game I'd never heard of before picking up this compilation, let alone played. (It's pretty good, thanks for asking.) The added bonus of several save states per title makes every old-school game on Evercade way more enjoyable, either because you only have 20 minutes to play, or for save-scumming advantage-gaining. (What? Some of these are hard.)

More recently, the Evercade's received two volumes of Atari Lynx collections - featuring California Games, Blue Lighting and Chip's Challenge (and, for someone who only ever saw a Lynx IRL once as a kid, it's been amazing digging into these games I completely missed out on) - and a cartridge full of games by The Oliver Twins, the creators of Dizzy. The name Dizzy might not mean anything to players in their 20s, but these egg-starring puzzle-platformers were huge in the late-1980s, on Spectrum, Commodore 64 and more. I can't think of one kid in my primary school classes who didn't have a Dizzy game. For home computer players yet to turn to consoles, Dizzy was our Mario.

Each Evercade cartridge costs £15 - meaning that even the double-pack, of the modern-day Mega Drive games Tanglewood and Xenocrisis (I covered the latter's Switch release, here), represents very good value. And a pack of 20, like the Piko Interactive collection and its several hidden gems? That's serious bang for not a lot of buck, whatsoever. And you don't need to wait two hours while a game updates, before you play it. Imagine.

And sure, not all of the games hold up well today. Of course they don't. Some you'll only dabble briefly with before relegating to the never-open-again ranks. But I've found at least a few games on every collection that I come back to regularly, be they titles from the Atari 2600, the SNES or Mega Drive era, or projects released in just the last few years, as is the case with the throwback-styled attractions of the Mega Cat Studios collection.

Gaming is better than it's ever been, right now. The PlayStation 5 and Xbox Series X are going to enable developers to create experiences that we've never seen before - and I am so very here for that. I'm not some blinkered old nostalgia nerd who believes that a golden age of gaming's already been and gone. But what I am is a fan of exploring gaming's past, finding treats that I never played in the 1980s and '90s, across several 8- and 16-it platforms, and basically uncovering treasure I never knew was there.

That's what the Evercade has allowed me to do in 2020: to dig in, to try something new, and to not feel any pressure to find an angle on whatever I've discovered. I pick it up in the evening, and I go on an adventure that no other console can give me. That's been really special in this most testing of years - a notable, essential break from the work side of video games, for me - and I'm absolutely certain that neither the PS5 nor the XSX could put a smile on my face quite as broad as the Evercade has. Here's hoping it sees plenty more support from its makers in 2021 - and how about a Bitmap Brothers collection, yeah?

a day ago
Netflix

'Stranger Things 4' Finale Is So Popular, It Literally Broke Netflix

Gamers Are Debating Whether "Teabagging" Players Is Sexual Assault