Here's something you don't play every day: a brand-new video game that doesn't just take inspiration from arcade shooters of the 1980s and '90s, but actively targets home consoles of the era amongst its launch platforms.

Having been crowdfunded on Kickstarter, Xeno Crisis is an Aliens-meets-Smash TV (with a little Chaos Engine mixed in) co-op arcade blast from the past that's out now for the SEGA Mega Drive and Dreamcast, with a Neo Geo version due in the near future. It's also available on PlayStation 4, Xbox One, PC and Switch - but, for a certain breed of gamer, it's surely all about that 16-bit cartridge.

Made by the Southampton-based Bitmap Bureau, Ltd, Xeno Crisis is a celebration of both SEGA's system - enjoying something of a renaissance of late, with the Mega Drive Mini having recently been released to great acclaim - and pocket change-crunching twin-stick coin-ops of old. It casts the player as one of two marines, sent into a series of aliens-infested installations and locations either solo or with a partner, to save stranded humans, cut through the enemy swarms (which, yes, come spilling from the goddamn walls) using a range of firearms, and ultimately eliminate a big-bad at the end of each stage.

Sounds pretty elementary, right? Quite classic in its construction, in its simple aims, influences-on-sleeves aesthetics, and kill-absolutely-everything gameplay? Well, yep, it absolutely, unashamedly is. And there's something incredibly refreshing about Xeno Crisis' undiluted throwback action, especially in short, sharp doses on a modern console, dipped into between sessions hacking through Drowners, solving cute cartoon mysteries or exploring haunted hotels (yep, I've been playing on Switch).

What Xeno Crisis definitely isn't, however, is a walk in the park. In a nod to the arcade machines of yore, which were designed to gobble up as much loose change as possible, as quickly as possible, this offers a stiff challenge to anyone unfamiliar with seeing the odds ramp up against them rapidly. Difficulty rises from a steep incline to a vertical nightmare inside three or four stages, and sometimes even from one room to the next. 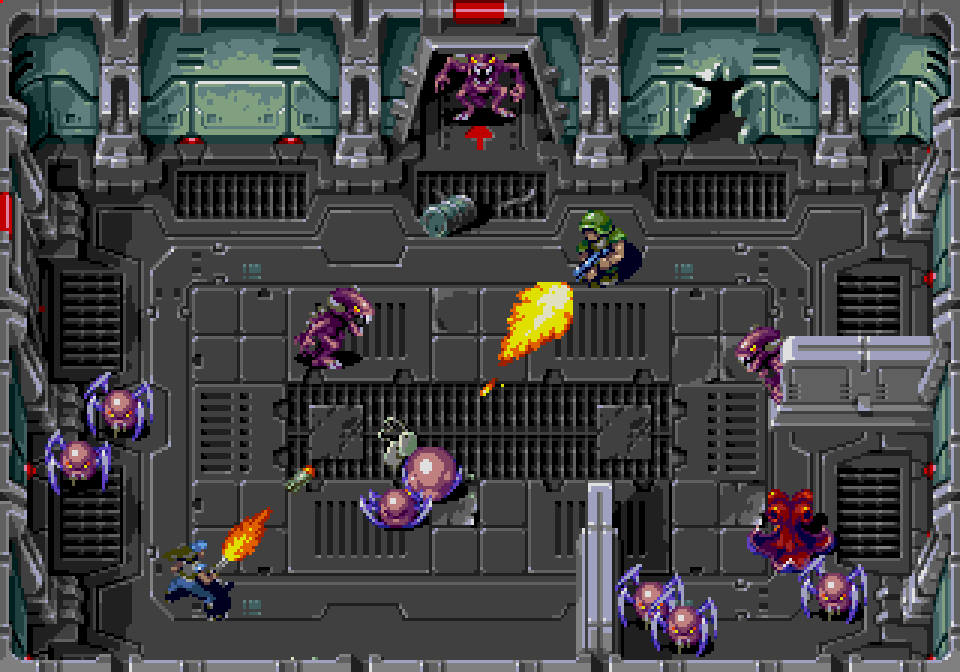 In every one of these stages - the first is a Hadley's Hope-style outpost; later comes a laboratory, a forest and a nest - you can collect dog tags, dropped here and there as you gun down the game's cast of diverse alien monsters. These range from the expected xenomorph-alikes to Tremors-recalling beasts that pop out of the ground to spit projectiles at you, to gross cyst-like lumps that burst with deadly results and skittery insectoid nasties. Defeat the level's boss, and you use these dg tags to level up, increasing shot power, health points, speed and the like, and to buy additional continues.

And you'll need as many of these tags as you can get your bloody mitts on, as Xeno Crisis quite quickly becomes unforgiving in comparison to so many 21st century titles. It has an easy mode, but don't expect to breeze through it - it's simply slightly less frenetic than the standard hard mode, which is active when you first start up the game.

Three continues, the industry standard of old, can quickly be rinsed; but such is Xeno Crisis' slick recreation of a gaming time gone by that this greying gamer can't not go back, over and over, creeping closer to its final stage each time. I'm not quite there yet, but each run is kept fresh by procedurally generated level designs, seemingly random weapon drops - sometimes a location will give you homing blasts, sometimes a shotgun, sometimes a flamethrower - and the blood-pumping combination of awesome pixel art and console-pushing music. (Which is to say, there are some bangers to accompany the blood and bullets.)

The team at Bitmap Bureau's done a terrific job in terms of audio and visuals here - to such an extent where you'll marvel that a Mega Drive could ever handle it. But handle it, it does, albeit with the caveat of coming 30 years and more after the console's debut. Which is to say, enough time has passed for committed developers to really work out how to get the most out of the system, or systems in this game's case.

Pick this up on PS4, PC or whatever else your modern platform of choice is, and you're guaranteed a good time if retro-flavoured gaming's your thing. But plug Xeno Crisis into some bona-fide old-school hardware and, well... I know it's not magic, but there's something decidedly magical about this. Just don't be surprised if, when your continues have run dry again, you resort to using a little harsh language.

Xeno Crisis was played on Nintendo Switch, using code provided by the developer.

‘Halo: The Series’ Interview: Negative Season One Feedback Is Being Heard

Christian Bale Will Play Batman Again, On One Condition

a day ago
Horizon Zero Dawn

a day ago
Red Dead Redemption